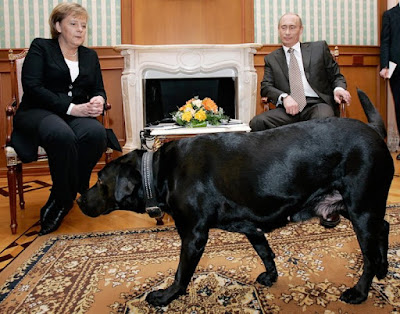 As a child, Chancellor Merkel was bitten by a dog, instilling her deep fear of canines. Merkel's fear is well known, and perhaps worryingly for Germans has reportedly been used against her by foreign leaders. Russian Prime Minister Vladimir Putin, a master of psychological diplomacy, has repeatedly attempted to take advantage of Merkel's fear. In 2006, the then-president perplexed German diplomats by presenting the chancellor with a small dog as a gift and made a habit of having his black Labrador, Koni, sit in on their meetings. Putin's successor, Dmitry Medvedev, has put a stop to the practice.